Fling on the fake tan and your smallest bikini and get to know the new singletons - Love Island is back.

5 things you need to know about Love Island this year 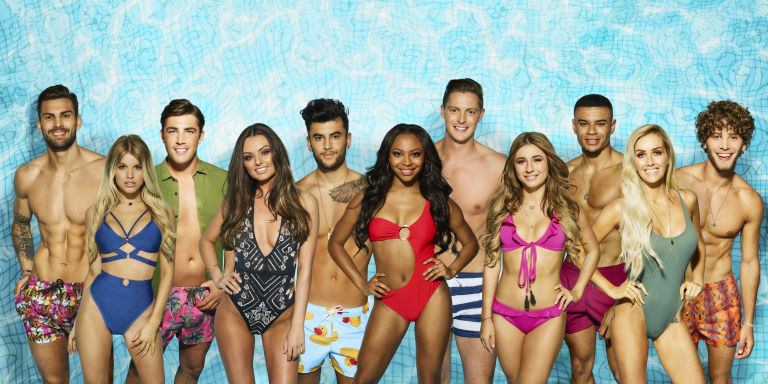 On Monday, 11 beautiful people are being dropped off at a villa on the Spanish island of Majorca as they attempt to find love.

And there'll be cameras in every corner to capture all the highs and the lows for ITV2 viewers.

Here's everything you need to know before you watch the show... and give up your social life for the next two months.

The Bata-winning show's basic premise is for contestants to find themselves a partner who is their perfect match - or "100% my type on paper" in the words of last year's winner Amber Davies.

Couples pair up and share double beds, get to go on dates outside the villa and also compete together in challenges to win prizes.

The prizes include a night in the hideaway, which is basically a secluded area away from everyone else and is totally private (apart from all those cameras of course).

Sounds simple enough, but what if you don't like your partner, or even worse - fancy someone else's more?

That's where the fun starts - throughout the series a number of eliminations will take place, as couples shift around and the odd ones out get sent packing.

The clue's in the fact that only 11 contestants have been announced, meaning someone will be left broken-hearted at the first "coupling up" - when islanders choose who they want to be with.

This year they have arrived, with the singletons including West End performer Samira, construction worker Niall and A&E doctor George.

The 2017 show saw Blazin' Squad member Marcel Somerville enter the villa, and again this year there are a few contestants on the show who are already used to the limelight.

Eyal Booker, who once was in boy band EverYoung, is looking for love, as is the daughter of EastEnders actor Danny Dyer... who's called Dani Dyer.

There are many more attractive people waiting patiently for their taxi to the airport though, and whilst ITV2 are keeping tight-lipped on who they may be, it's sure they'll cause a stir when they eventually walk through the doors of the villa.

All the contestants are given phones, which they can use to message each other, take photos and receive instructions from producers about upcoming challenges.

This is the only access they have to technology though - and when it comes to dating on the show, there isn't a swipe in sight.

Caroline Flack that this is all part of why the show has so much appeal.

"Even though it's a modern dating show, it's actually an old-fashioned way of getting to know someone," she said. "We have no mobile phones, there's no internet, no Tinder, they're actually going back to the old art of conversation to fall in love.

There's no liking, no poking, no stalking, you actually have to talk. It's a sped-up real life relationship

Filming will be around the clock, but the love islanders have new rules to follow this year.

One aspect of the show last year was so controversial that it was tweeted about thousands of times, attracted a number of Ofcom complaints and was even debated by the house of lords.

And no we're not talking about footage from the bedroom.

It's smoking inside the villa, which has now been banned by the producers, after nearly every Islander was seen having a cigarette at some point during the two months the last series was on air.

Head of ITV2 Paul Mortimer said: "This year, we've got in place a plan for the smoking area to be outside the villa rather than outside the garden."

Of course there still will be a camera there, just in case.

Last year, people were left struggling with the dilemma of what to do outside of the hours of 9-10pm, knowing that there was no new Love Island content for them to enjoy.

Fear not, because Caroline Flack's extra show, Aftersun, returns alongside a shiny new podcast hosted by one half of last year's winning couple, Kem Cetinay.

It will be called Love Island: The Morning After and Kem will be joined by radio host and Love Island super fan Arielle Free for six episodes a week.

They will call on special guests to help them unpack the events from the night before, along with providing exclusive content. On new years day at 5.03pm my salon in Dartford was broken into. This is my own cctv footage that has been shared with the police. Please reshare this on all your soscial medea pages. There is so much detail on this video of the robbers, from their trainers to the way they walk and your can also here there accent as well. Share the life out of this again if you can please.

Hi there. My name is Dan and I’ve been a customer getting my hair cut for over 20 years. My children had their first hair cuts there and still do.
2022 will be the 90th anniversary of the establishment of Mardells hairdressers by the Grandfather of he current owner Mark Mardell and it’s a name and business that has been synonymous with the town of Dartford since then.
They have been cutting mens, womens an childrens hair for 4 or 5 generations of people, overcoming World War 2, economic depression in the 80’s, having to move their from their original shop due to redevelopment, a huge water leak only a couple of years ago that flooded the entire shop destroying everything and closing the business for a year and more recently the horrendous affect that all businesses experienced due to Covid 19, which Salons across the country it seems, were hit harder than the average shop having to close for far longer.
And yet they survived. Just about. The recent lockdowns brought the future of the Mardell salon into question, raising concerns that the 90 years worth of lineage and dedication to the people of Dartford might have to end.
But Mark refused to allow that to happen. The recent death of the previous owner, Marks Father Melvyn, was a huge blow to not only him and his family and friends but to the community as a whole. Having been a staple in Dartford for over 50 years, Mark couldn’t allow a little thing like a global pandemic be the end of his business and families legacy.
So he fought hard, risked everything to plough on, devising new services and exciting promotions to rebuild his cherished salon only to have some thieving, criminal, thugs feel that it was ok to destroy the front of his shop, the wooden flooring inside, steal thousands in GHD products and smashing display cabinets.
This has meant that at a time straight after Christmas and with the threat of another potential lockdown hanging over him, Mark and his family and his amazing staff need the money the most and they are now forced to close.
The news from the insurance companies is not positive, refusing to cover the main bulk of the damage which is valued at around £5000. That doesn’t even include the loss in wages for everyone, the floor and all of their products.
This could be make or break for the Mardell hairdressing name in Dartford, so I wanted to organise a fund raiser to try and help him and his staff in anyway we can, in the hope that they can fight on and make it through this traumatic time and still be there to see the 100th anniversary in 10 years time!!!
I have set the amount at £1500 so that we have something to aim for but the reality is that it’s probably more like £10k that’s needed. But if you can find it in your hearts to donate anything to help, anything at all will hopefully mean that Mardells stays a place where we can all go to make us look good for a daily lives and our most special occasions for many years to come.
So dig deep people and share this with as many others as you can.
Lets keep the ‘Mardells’ salon alive!
This site uses cookies: Find out more.